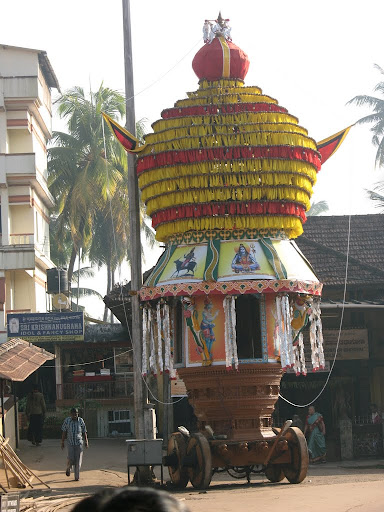 
Lord Krishna's Car was standing majestically near the entrance of his temple at Udupi. After spending some time near his Car we proceeded towards the temple. It is a small temple, the outside architecture looked simple and many parts of the outside building seemed to have been built in the recent times; moreover we could see many donations have been made by people from different sectors of the society, for instance, one business man had contributed air conditioner for the entire temple; the paintings dedicated by various artists are kept displayed throughout the inner walls of the temple. They just echo the intensity of love and attachment the people have on this temple.
We stood in the queue watching all the paintings made on various Hindu Gods.The queue moved slowly and finally we encountered a small window like structure whose bars are beautifully decorated with Gold plated carvings. Through the holes we saw the idol of Lord Krishna glittering in the lighting which came from the oil lamps kept on both the sides. Truly, words won't be sufficient to describe the beauty.
Initially I was not aware that this is the only view available - the view of the idol through the window. I was on the wrong notion that this is just a trial and that one can get the complete view at the main door. The window is such that one cannot get the complete view of the Lord through just a single hole. We had to see through various holes to view the entire parts of the idol.
Here I like to appreciate the intelligence of the architect. He was knowing the formula that curiosity increases with concealment; There was a natural rise in our curiosity as we couldn't get the complete view of the idol through just one aperture of the window. Hence we stood in the queue to see the Lord once more.
Of course, there is the below interesting story which had been spread through word of mouth:
"In the 16th century, during Sri Vaadiraja 's rule, Kanakadasa, an ardent believer of God, came to Udupi to worship Lord Krishna. He was not allowed inside the temple since he was from a lower caste. Sri Krishna, pleased by the worship of Kanakadasa created a small hole in the back wall of the temple and turned to face the hole so that Kanakadasa could see him. This hole came to be known as KanakanaKindi"(Courtesy: http://www.mangalore.com/documents/udupi.html)

A further search on the internet gives a more realistic explanation for the Kanakadasa story as below:
"Kanakadasa once wanted to have a darshan (encounter) of the Lord Krishna in Udupi. He was not allowed into the shrine by castist priests as he was not a higher-caste by birth. Kanakadasa then started singing the praises of Shri Krishna and was lost to outside world in a corner outside the temple. Legend has it that the western wall collapsed so that Kanakadasa could have darshan of Lord Krishna's icon. A small window was constructed at the breach later. The idol of Lord Krishna is still today worshipped through the window. This window came to be known as Kanakana kindi (Kanaka’s window). Historical evidence shows that there was indeed a small earthquake on that day which led to the collapse of the wall. (Note that the statue of Lord Krishna was facing to west even before this incident). The memory of Kanakadasa was permanently etched in the temple of his beloved Lord Krishna. Today that window stands as a tribute to the unique saint of Karnataka.

From that time onward, Kanakadasa could have the darshan of Sri Krishna with his physical eyes as well as his inner eye. To perpetuate this sacred memory, the tradition of looking at the icon of Sri Krishna through this window before entering the shrine started."
(Courtesy: http://en.wikipedia.org/wiki/Kanaka_Dasa )

Epilogue:
According to me, Stories like these should not be investigated for its authenticity, in the first place. They are meant just to entertain the hearer. In the language of the present age, they are a kind of advertisements. To explain you further, lets take the example of an advertisement where Sachin Tendulkar appears on the TV screen and says "Boost is the secret of my energy" This dialogue is accompanied by one of his favorite shots where he scores a Sixer. This ad is for the Brand "Boost" - an energy drink. Here the medium used is Television which is omnipresent.
Now lets decode the story of KanakanaKindi:
Kanakadasa was a famous person in those days.
Brand name was Udupi - remember the lines from part 1 of this blog "Temples, according to me, were built to bring a fortune for the people living in that area"; "The people wanted to promote their village"
Medium used was Krishna who was well known everywhere and universally accepted as a super hero and whose life and teachings are accepted as the role model for all the ages to come.


Your comments are welcome!

Thanks
Saptha
Posted by Saptha at 9:45 AM No comments:

The Temple Stories - Part I

DISCLAIMER: All that have written here is based on my own thoughts. They are not meant to hurt the sentiments of anyone. Just plain thoughts. 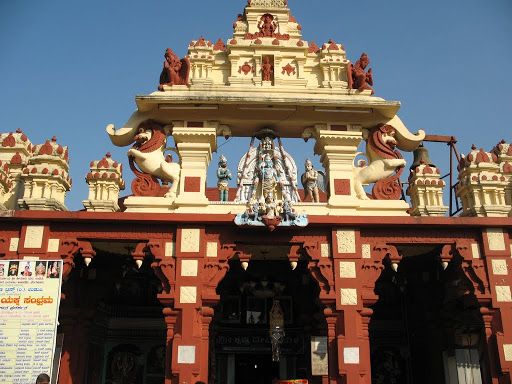 "We are going to Udupi" My wife proudly told the co-passenger. She didn't stop there. "We then gonna see Kollur, Mookambika temple, Murudeshwar and also Gokarna and will return after five days of seeing all these places."
Yes, she succeeded in making the co-passenger envy. But why should they feel jealous about us. We are going to visit just the temples. Is it the sentiment the people attach to these places? How important it might be, still it's just a temple, isn't it. What will be so attractive with a Temple?
"Temples - according to me, were built in the olden days to bring a fortune for the more jobless people living in that area." I started my own philosophy with my wife.
"Fortune?"
"Yes, also just building a temple would not be enough. They had to tell some fascinating stories around each of the temples they built; and once the stories spread by word of mouth, the place would attract people and it would become a famous pilgrim or tourist spot, thereby the tourism and the associated businesses like boarding, travels, hotels, everything would get flourished. The probability would increase with the number of temples. Hence they built as much temples as possible" I said and looked at my wife only to find that she was no more listening to me.
Alas, I didn't know at which part of my speech she lost the interest in listening; She was playing with our one year old son now.
Nevertheless, I was determined to finish my talk. In a louder voice, I asked, "And what is wrong in spreading stories if it helps a lot of people to earn their bread and butter, huh?" I thought my question would restore her interests back. But she replied plainly "I don't know"
Coming back to my point, the temple builders wanted to contribute to the development of a village and made stories while constructing temples. And the temples formed the center point of development of that village unlike these days where the software companies form the center point around which people build their houses. In the case of Udupi Krishna temple, one of the popular story goes like this. The main statue of Sri Krishna at Dwaraka got completely covered by gopichandanam ( holy sandlewood). A sailor from Dwaraka loaded this heavy lump in his boat as ballast, in one of his trips along the west coast. The ship was caught in a terrible storm while sailing in the western coast of Malpe. When the meditating Sri Madhvacharya sensed this by his 'aparoksha' or divine jnana (knowledge), he got the ship safely to the shore by waving the end of his saffron robe and quietening the storm. The  pleased captain of the ship offered Sri Madhvacharya anything in the ship in return. Sri Madhvacharya asked for the sandlewood piece containing the statue of Sri Krishna. Later as the story goes,  Sri Madhvacharya took it to the lake, purified it and installed it in the matt. (Courtesy: http://www.mangalore.com/documents/udupi.html)
After reading this story, I was made to think about the below possibility.
The temple builders wanted to promote their village. They had to somehow link their village with Dwaraka, the birth place of Krishna. They took the help from Sri Madhavacharya who played the role of an ambassador. Using his influence they might have got the main statue of Krishna from Dwaraka.

I guess what you feel now, "Is this author anti-religious?"
Well, Lets read till the end before concluding.
The stories of the super heroes for whom they built the temples, were not just the imaginations of a few individuals; They were taken from the life histories of the super heroes who lived in those days. A simple fact to prove the above statement is the mere existence of numerous temples at different places built at different times by different people but for the same God names like "Krishna", "Shiva", "Ganapathy", etc.
And it is easier to copy the real life story than to sit and unanimously cook up a fiction, isn't it?
Well you may think how I can prove that characters like Krishna or Shiva really lived in this earth. The problem is I belong to the very present generation. Had I born in the ages of Sri Madhavacharya I could have analyzed along with him and confirmed the existence of Krishna. We are too late to investigate the existence of those Super heroes, Krishna or Rama. But I believe that Sri Madhavacharya or Sri Adi Sankaracharya really lived in this earth and we have enough proofs for that. And since those saints who lived at different times believed on the existence of Krishna, Rama or Shiva, we are also bound to believe them.
So I was saying that the temple builders took the incidents from the lives of super heroes who lived in the past.
In Krishna Leela, one fine morning, the baby Krishna after waking up from the bed, crawls to his mother Yasodha who was sitting and stirring the mud pot of curd to extract the butter. Seeing the baby Krishna, Yasodha realizes that its his milk time. No sooner Krishna spots his mother, he starts crying for milk. Yasodha at once puts down everything as such and rushes to the kitchen to fetch the milk.

In the mean time the naughty Krishna starts his leela, he suspends his weeping for a minute; silently goes near the pot of curd and takes it and simply thrashes on the floor. The mud pot breaks and spills out all the curd. Needless to say all the efforts of his Mom are in vain now. Before Yasodha could understand anything, Krishna takes up the butter-stirrer in his hand and comes outside the house. Sitting on a stool he then continues his cry for the milk as if he is innocent of the damage just happened inside the house. As his story continues like that, we have this statue of Krishna - 'The standing kid with the butter-stirrer in his hand' erected at Udupi, a testimony to this incident of his life. Like wise we have various forms of Lord Krishna depicted at various other temples in India, all remain evident to his life and teachings. The above narration of Krishna Leela is from the words of Smt.Vishaka Hari

Well, I must confess that this blog is not really to prove anything here. Lets simply talk about the temple stories and get delighted about it.
Continued in Part-2 ...
Posted by Saptha at 10:21 AM No comments: 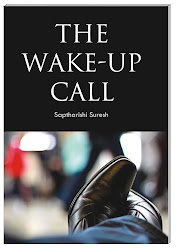